Our History of Ford Cottage 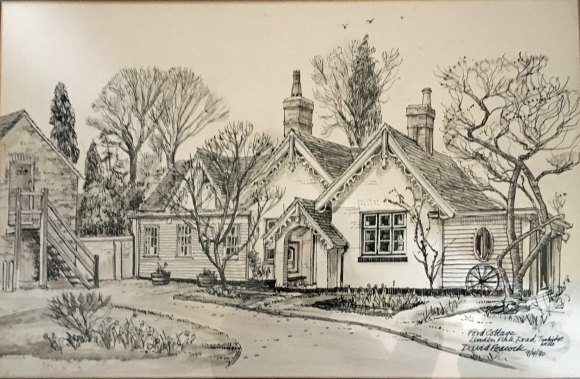 In 1980 we commissioned David Peacock, a well known local artist, to sketch Ford Cottage - before we undertook any conversions to our home.

Ford Cottage was built around 1856 on land owned by the Marquis of Abergavenney. The Marquis was a large landowner and his estates stretched into Kent and Sussex - almost as far as Brighton. The Cottage was built to serve the big house next door, to provide a home for the coachmen and gardeners and was a "tied" cottage for many years.

At the turn of the century it was occupied by a Mrs Elizabeth Ford who, we presume, gave it the name, Ford Cottage. It originally had four basic rooms- a kitchen, reception room and two bedrooms. Other owners have been a doctor who visited his patients in his pony and trap and a market gardener.

Other utility rooms were attached which included a fuel store and a potting shed but the main rooms were, we understand, used to stable the horses and later for motor cars. These rooms now form The Stables which is one of our self catering suites.

Across the courtyard is the coach house annexe and even when we took over this property some 40 years ago, the coach house had a rack for the horses' tackle and a space in the ceiling of the ground floor into which the shafts of the coach would be raised to enable the coach to be properly housed. The first floor had lifting tackle to raise animal feed and this has now been converted into our coach house annexe - our other self catering suite of rooms, which we call the Hayloft.

At one time Ford Cottage and grounds were established as a small market garden with a large orchard to the rear. Many greenhouses were used and one cedar building that remained standing and in use until 2007. This was manufactured in 1937 by a local company.

Over the past years, there have been many additions and changes to the cottage and garden, but we have always tried to sensitively retain its essential  Victorian character.